Posted on September 7, 2016 by Charles Yallowitz 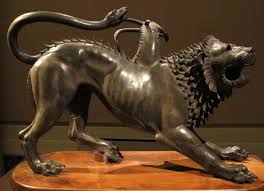 In mythology, the chimera was a monster that had the parts of various animals.  Usually, a lion, goat, and serpent with the ability to breathe fire.  It was eventually killed by Bellerophon and Pegasus. In modern times, the term is used for something composed of various parts that can be discerned from each other.  I think there’s also a genetic term when a single organism has two different DNA signatures.

Windemere is similar to that second option, but maybe a touch of the third if you replace DNA with aura.  These creatures are going to play a surprising role in Charms of the Feykin.  I can’t go into the details because it’s a fun surprise, but you’ll get an interesting look into their creation.  So, where do they come from?

There are two ways to create a chimera in Windemere.  The first is to use magic to combine parts of various creatures into a single, functional being.  This is a very high level of necrocasting since the original owners of the pieces usually die after the harvesting.  It can lead to a chimera have some undead features and being affected by holy spells, but not to the extent of true undead.  The result is a semi-mindless beast that can be unleashed on a populace or used as a guard dog.  A chimera made with this method tends to have seams and be a little sloppy, which is why they get mistaken for golems at times.  They’re also no nearly as strong as the second version.

Rarer and more dangerous then the necrocasting type, a chimera born from fallen shamans or other spirit summoners is a force to be feared.  These people tend to work with multiple spirits that range from animals to monsters to other people.  It’s a difficult and sensitive type of magic because you’re working with two auras in unison.  Many times, this takes the form of the caster taking on the form or abilities of the being that they are calling upon.  For example, a shaman that has befriended the spirit of a mermaid can swim either in the creature’s form or simply by growing the necessary lungs.  A partnership is required here, but things can go wrong.  The auras can get tangled due to outside stressors or a malicious spirit getting the upper hand of the shaman.  Since most spirit users work with multiple spirits, all of them can get drawn into the chaos.  The result is a chimera that looks like a physical combination of the others, has most of the abilities of them, and is dominated by the malicious personality.  These typically happen by accident and result in a lot of destruction because it can occur within minutes.

The chimeras are fun to bring out and they started as an average beast.  Just a strange monster that appeared when I wanted something dangerous and unpredictable.  At least that was the plan before I actually used one.  It happened in Sleeper of the Wildwood Fugue and I’ve enjoyed the twist ever since.  This makes the chimera more than a marauding creature, which is great for future stories.  Maybe a hero will come across a shaman trapped as a chimera, but he/she has regained mental control.  Perhaps an army of chimeras are unleashed.  This really ups their importance in the overall world like I did with griffins and orcs.  Curious to see where else they go.

Charles E. Yallowitz was born, raised, and educated in New York. Then he spent a few years in Florida, realized his fear of alligators, and moved back to the Empire State. When he isn't working hard on his epic fantasy stories, Charles can be found cooking or going on whatever adventure his son has planned for the day. 'Legends of Windemere' is his first series, but it certainly won't be his last.
View all posts by Charles Yallowitz →
This entry was posted in Uncategorized and tagged chimeras, creatures, epic fantasy, fantasy, high fantasy, Legends of Windemere, monsters, mythology, sword & sorcery, Windemere. Bookmark the permalink.