Demands from the Dwarves of Windemere 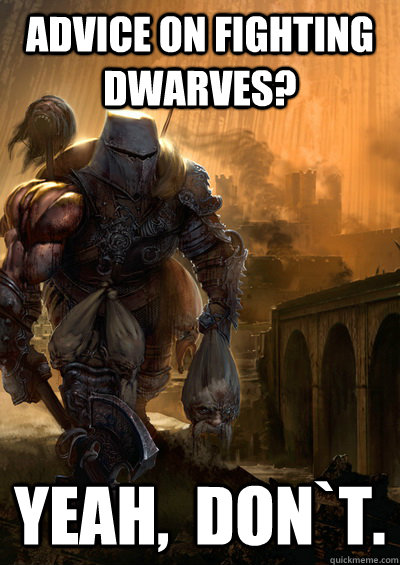 We have taken over the Windemere blog for today because we’re tired of being ignored here!  All we see are posts about elves, humans, half-elves, halfling, calicos, vampires, gnomes, and even orcs.  Why is there no respect for the dwarves?  Is it because we’re shown to be gruff and blunt?  Do your real world sensitivities make it difficult to deal with us?  Maybe it’s because we only show up as blacksmiths, drunks, miners, mercenaries, and thugs.  Never see us as a love interest unless you pretty us up and thin us down.  Well, we don’t appreciate being depicted as half elf/half dwarf abominations.  A real dwarf is callused and burly of beard.  Put down the autograph book, Brocker, because that’s not we’re here for.  We want to make a statement and give our demands to all those snobby fantasy authors:

Uh . . . Who has the demand list?  I thought someone was writing it down during the meeting.  Why would I do it when I was standing on the table and talking?  I don’t care if you would have had to put your ale down.  Hook the rim of the mug with your teeth and tip your head back to get a sip.  We’ve all had times where both our arms were broken and we needed a drink.  Now we look like idiots when we’re not.  Just get carried away with our celebrations and being the best brewers on the planet.

Sorry about that mistake, but our anger persists.  Dwarves have been pigeonholed into a handful of roles and we think it’s time for us to branch out.  A few authors have done this and we thank them for it.  The case of our best ale is in the mail.  See, we can even be poets.  Our romantic sides are horribly overlooked.  You don’t think we know anything about flowers?  Elves might be the types to dance among the roses, but they have no idea about the perfect soil to keep a plant going.  We can even give you a bouquet with enough roots to make them easily placed in the garden instead of left to die in a vase.  I don’t care how it’s pronounced, Brocker!  And you want to talk about jewelry?  Where do you think all the pretty gems come from?  It isn’t halflings or humans toiling away in the depths of the earth.  So when a dwarf wants to give you jewelry then you know you’re getting the highest quality present.

This isn’t even our biggest issue.  We can find love on our own time, but what we can’t do is take the main role of a story.  That is the author’s choice and we are routinely refused the title of protagonist.  Dwarves get all the other roles, including main antagonist at times.  So you think we can be evil bastards and not noble heroes?  Well that’s all levels of racist.  We are tough and noble warriors with a love of ale, honor, and righting wrongs.  I guess we could be casters and priests too.  Our people aren’t known for our thief skills, so I’ll give you that.  Oh, and stop with the berserker dwarf who dies defending the group from an army.  That stereotype is so wrong and ignores the fact that we are cunning tacticians.  You act like every dwarf is an angry drunk.  Would you like it if I said every human was a horny drunk?  No because that’s a generalization and . . . I know most elves are like that, Brocker.  Stop ruining my point!

Don’t get us entirely wrong here.  We do love our ale, axes, and mining.  Not to mention our luxurious beards.  Still, that doesn’t mean we should be banned from the juiciest of roles.  So next time you’re writing a fantasy story and thinking of a good hero, consider the dwarves.  We think our time has come.  Yes, we can drink now, Brocker.  I guess some of us are the stereotype.  Pass me a mug.

Charles E. Yallowitz was born, raised, and educated in New York. Then he spent a few years in Florida, realized his fear of alligators, and moved back to the Empire State. When he isn't working hard on his epic fantasy stories, Charles can be found cooking or going on whatever adventure his son has planned for the day. 'Legends of Windemere' is his first series, but it certainly won't be his last.
View all posts by Charles Yallowitz →
This entry was posted in Legends of Windemere and tagged author, demands, dwarf, dwarves, epic fantasy, fantasy, fiction, high fantasy, humor, Legends of Windemere, magic, message, sword & sorcery, warriors, Windemere, writing. Bookmark the permalink.

35 Responses to Demands from the Dwarves of Windemere