Nimby: The Torn One (Threat of Spoilers)

Posted on January 14, 2014 by Charles Yallowitz 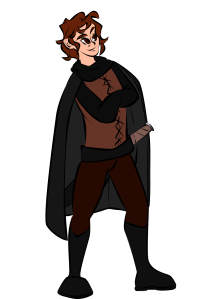 Nimby holds a really important role in the life of Luke Callindor and the overall series.  He is main cast until the end of Prodigy of Rainbow Tower.  Then he falls into a recurring role with major importance later.  This is really difficult to go into without spoilers, but leaving Nimby out would also be telling.  All I’ll say is that if you read to this anyway then it isn’t what he did, but the reasoning behind it.

The Founder and Protector

It’s pointed out at one point that Nimby is the reason everyone found each other and why Luke is still alive.  He is the one who befriends Luke and learns about his secret mission then brings Fritz and Aedyn into the events.  Nimby uncovers the heir and does many other things that keep his friends alive.  Part of his theme is that while he’s a thief with a dark past, he is also a loyal friend.  Most thieves in fantasy are designed to turn entirely evil or screw over the group unintentionally . . . let’s skip to the second.

Nimby screws over the group with his actions in Prodigy of Rainbow Tower.  Without going into details, he shatters the group and does a number on Luke.  Part of this deals with his past and a secret he had been keeping.  It puts him in the position of a character seeking redemption from the reader and every other character.  Seriously, he pulls a major play on everyone on both sides of the conflict.  This means that whenever Nimby is mentioned or appears in the future, he is working on redeeming himself.  If not redemption then he’s being punished.  This is a hard one to explain without going into details.

Charles E. Yallowitz was born, raised, and educated in New York. Then he spent a few years in Florida, realized his fear of alligators, and moved back to the Empire State. When he isn't working hard on his epic fantasy stories, Charles can be found cooking or going on whatever adventure his son has planned for the day. 'Legends of Windemere' is his first series, but it certainly won't be his last.
View all posts by Charles Yallowitz →
This entry was posted in Character & Book Themes and tagged author, characters, fantasy, fiction, friendship, halfling, redemption, themes, thief, writing. Bookmark the permalink.

5 Responses to Nimby: The Torn One (Threat of Spoilers)